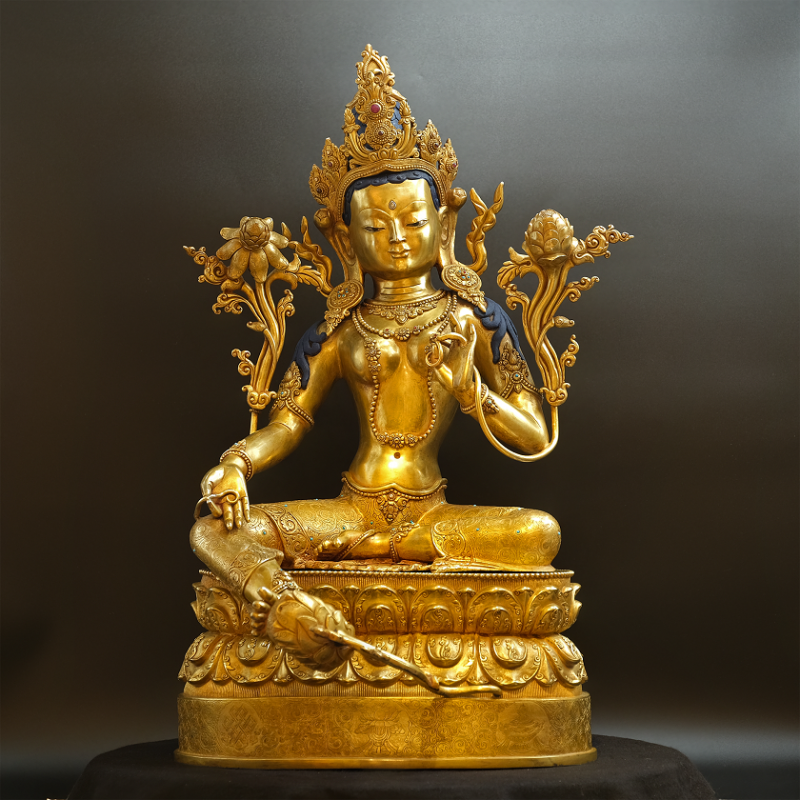 This Green Tara is made of copper, elaborate with fine gold (24 carat)
gilded unique piece. It is 56.5 cm high and 36 cm wide, comes from Nepal and
was the regional Kathmandu style of the 14th and 15th Jhs. modeled.
Tara (skrt. "Star", Drölma, "savior") embodies the female Bodhisattva
Principle of Compassion, as well as Chenresig (skrt. Avalokitesvara), you
Buddhist, male counterpart.

This Green Tara is made of copper, elaborate with fine gold (24 carat)
gilded unique piece. It is 56.5 cm high and 36 cm wide, comes from Nepal and
was the regional Kathmandu style of the 14th and 15th Jhs. modeled.
Tara (skrt. "Star", Drölma, "savior") embodies the female Bodhisattva
Principle of Compassion, as well as Chenresig (skrt. Avalokitesvara), you
Buddhist, male counterpart. She was, according to legend, from a tear
of the great compassion Bodhisattva, which he out of grief over the suffering of
World had shed. (Historically she connects with a Tibetan king
accommodated.)
Of the 21 common forms of tare, the whites and the greens are the main ones
Tara revered. The so-called Green Tara is above all a "savior" and
Guard deity known, but also as a teacher of asceticism and wisdom. Of the
According to legend, the Green Tara was a princess who had vowed to be in one
reincarnate the female body and attain enlightenment in it. you
realized her noble project and became a role model for women and men.
The peaceful expression of this statue reveals the state of "redemption"
(sakrt nirvana) the Tara. Her black painted eyes are lined with fine silver.
The ascetic hairstyle (Skrt. Jata), that is the - painted blue in this piece -
Filzlocken, refers to their superiority over all worldly things.
Cervical, arm, hand and foot jewelry show pearly staff ornaments and are with
Turquoise and coral occupied. The same applies to the magnificent crown, which also
a very beautiful red stone in the upper end shows, which is a
Ruby could act. The Tara holds the stems of two lotus flowers in her hands,
show the different stages of growth and sit upright in the for their
Representation of characteristic Lalitasana posture on a lotus pedestal (skrt.
Padmasana). Characteristic of Lalitasana is the position of her legs, the one
struck and bent horizontally, the other over the seat
droopy. The tara supports the right foot on a lotus (skrt. Padma),
at any time ready to rush the admirers efficiently to help. The lotus is symbol for
eternal dharma, perfection, purity and self-renewing creation.
The tara is clothed with a long dhoti and one over her shoulders
fluttering scarf. These two elements, as well as the jewelry she wears point
the figurine as a female Bodhisattva. The Dhoti is at waist height with one
attached to semi-precious stone band. The flowing, finely worked out folds
and engraved floral patterns create the impression of a breezy delicate
Tissue, especially in the area of ​​the bent leg.
The complicated fabrication of this tare involves 6 different techniques
Participation of just as many artisans and a time effort of around
a year. Characteristics of the successful realization of a highly sophisticated
aesthetic scale are their well-balanced body proportions and limbs,
in whose formations the foreshortening was considered.
Especially her exquisite Bodhisattva jewelry that is sculpted by the body
takes off and at the same time conforms realistically, testifies to the high quality of this
unique green tare.
(Jennifer Afzal)

Please ask for availability before purchase.

16 other products in the same category: